MAP OF WAY
Time for uprising!

Direct democracy or representative democracy should have same result, but they do not. Something strange happens in the ballot box.

Right (Right of sovereignty) goes into the ballot box by voters hands, and Might (= violator of right) comes out.

The result is no longer “Common Righteousness” for all society and Goodness for each citizen. Because of lack of these results, such process deserves to be called “Might-cracy”, not Democracy.

Representative Might-cracy is depicted as follows: 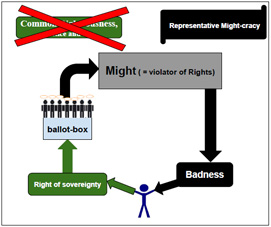 Despite humans’ achievements in science and technology, human society operates according to “Might”. The best evidence for this claim is war. War is the ultimate violator of human rights and best sign of the dominance of “Might” among humans.

Representative Might-cracy and Classical Might-cracy have the same result. Both of them deprive ordinary citizens of their rights.

Classical Might-cracy is depicted as follows: 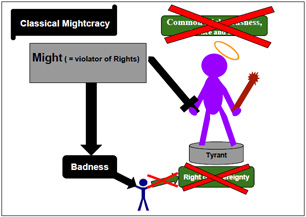 However the Representative Might-cracy is better than Classical one, but both of them are violators of human rights. Principally compare between bad and worse forces human to choose bad one, but bad cannot provide human rights properly.

Only surveillance of each individual citizen from election to legislation with right to take abusers to court (judiciary branch) can prevent distortion of “right of sovereignty”.

An individual citizen has right to exert his right of sovereignty and see its result in form of “Righteousness” for all society and Goodness for himself.

The individual surveillance is depicted as follows: 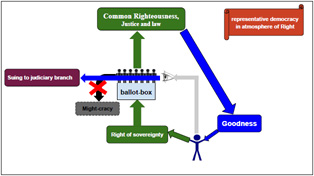 The main purpose of participation in a democratic decision making process is for each individual, exerting her or his right of sovereignty to ensure “Common Righteousness”, justice and law for all society.

Any factor that disturbs this natural process destroys citizens’ right of sovereignty and freedom because freedom is ability to use and exert the rights by choosing necessary moral devices. Also the having access to Justice, when the rights of individual are ignored, abused or violated by other individual(s) is an inevitable attribute of freedom.

We shall make a political system in which no one can break the halo of sacredness around the democratic process and deprive citizens of their freedom.

The necessary halo of sacredness is depicted as follows: 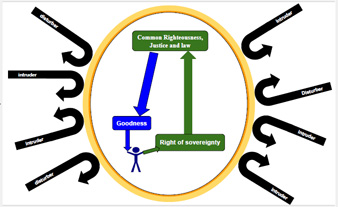